Are you looking for some great board game gifts? Do you need to entertain your family during the holiday season? Here are some of our favorites!

As a tile-laying artist, you have been challenged to embellish the walls of the Royal Palace.

In the game Azul, players take turns drafting coloured tiles from suppliers to their player board. Later in the round, players score points based on how they've placed their tiles to decorate the palace. Extra points are scored for specific patterns and completing sets; wasted supplies harm the player's score. The player with the most points at the end of the game wins.

Bärenpark takes you into the world of bears, challenging you to build your own bear park. The park visitors are sure to get hungry on their tour through the park, so build them places to eat! Whatever your choices are, make sure you get the next building permit and use your land wisely!

In more detail, each player builds their own bear park, attempting to make it as beautiful as they can, while also using every square meter possible. The park is created by combining polyomino tiles onto a grid, with players scoring for animal houses, outdoor areas, completed construction, and more. The sooner you build it, the better! Cover icons to get new tiles and park sections. The game ends as soon as one player has finished expanding their park, then players tally their points to see who has won.

Players 1-6 (Great with any numbers)

You are the mayor of a tiny town in the forest in which the smaller creatures of the woods have created a civilization hidden away from predators. This new land is small and the resources are scarce, so you take what you can get and never say no to building materials. Cleverly plan and construct a thriving town, and don't let it fill up with wasted resources! Whoever builds the most prosperous tiny town wins!

In Tiny Towns, your town is represented by a 4x4 grid on which you will place resource cubes in specific layouts to construct buildings. Each building scores victory points (VPs) in a unique way. When no player can place any more resources or construct any buildings, the game ends, and any squares without a building are worth -1 VP. The player with the most VP wins!

In Kanagawa, the great bay of Tokyo, the Master Hokusai decided to open a painting school to share his art with his disciples. You are one of these disciples, and more than anything, you want to prove yourself worthy of the “crazy, old artist”.

Follow his teachings to expand your studio and paint your preferred subjects (Trees, Animals, Characters, Buildings), all while paying attention to the changing of the seasons in order to make the most harmonious print… the one that will become the work of your lifetime! 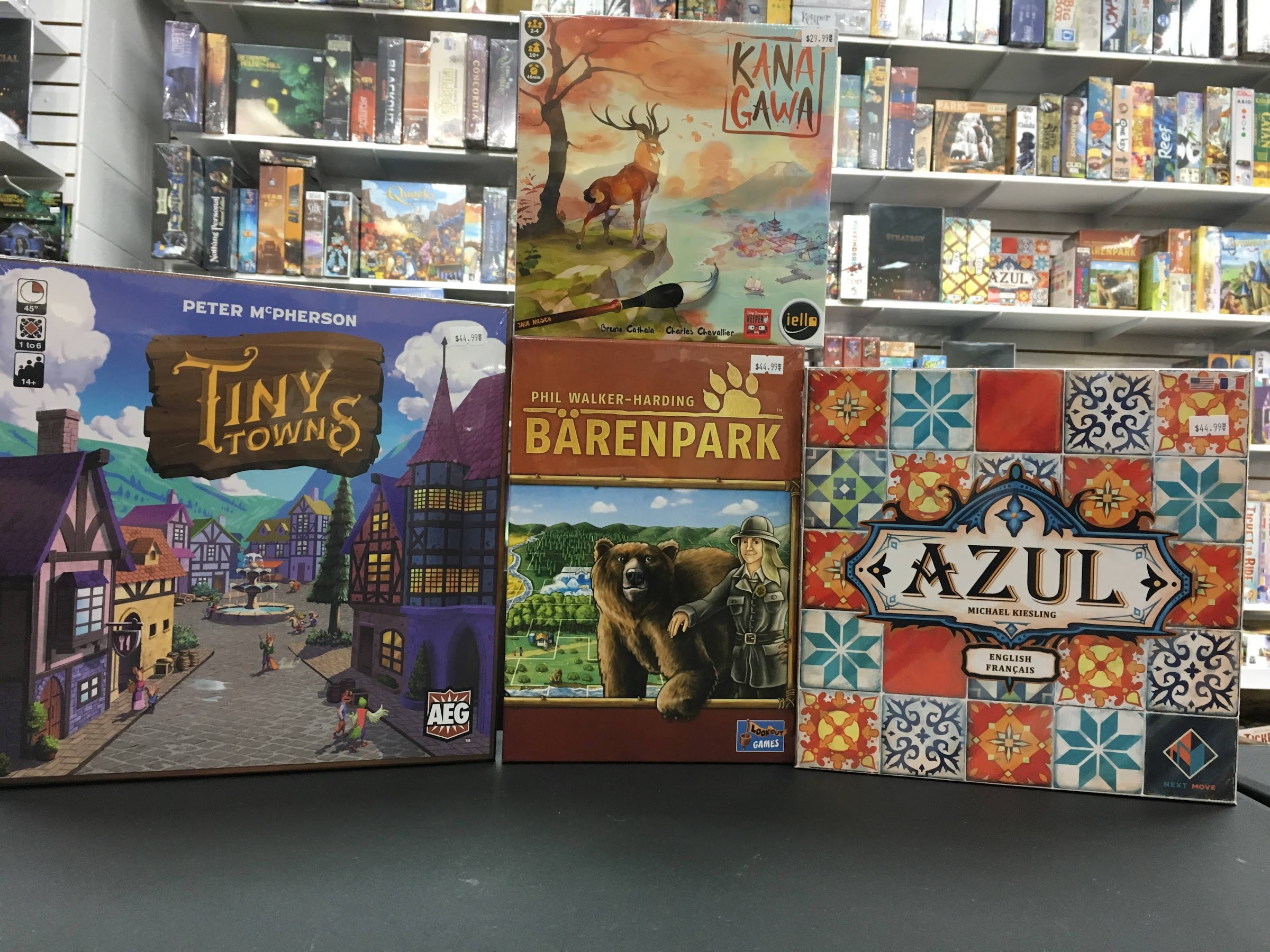 Magic Maze is a real-time, cooperative game. Each player can control any hero in order to make that hero perform a very specific action, to which the other players do not have access: Move north, explore a new area, ride an escalator… All this requires rigorous cooperation between the players in order to. However, you are allowed to communicate only for short periods during the game; the rest of the time, you must play without giving any visual or audio cues to each other. If all of the heroes succeed in leaving the shopping mall in the limited time allotted for the game, each having stolen a very specific item, then everyone wins together.

At the start of the game, you have only three minutes in which to take actions. Hourglass spaces you encounter along the way give you more time. If the sand timer ever completely runs out, all players lose the game: Your loitering has aroused suspicion, and the mall security guards nab you!

In Dragonwood, you collect sets of adventurer cards to earn dice, which you then use to roll against your foes. Stomp on some fire ants, scream at a grumpy troll, or strike the menacing orange dragon with a magical silver sword. Choose your strategy carefully because the landscape of Dragonwood is ever-changing. Only the bravest will overcome the odds to emerge victorious!

On their turn, players either draw a card or attempt to capture a creature or enhancement. With these cards players form combinations to attempt a Strike (cards in a row of any color), a Stomp (cards of the same number) or a Scream (cards of the same color). To capture, players roll a number of dice equal to the number of cards they have of the particular combination. Each creature has different minimum values of a Strike, Stomp or Scream needed to capture it, and a Victory Point amount.

Each player begins by sketching a TELESTRATIONS word dictated by the roll of a die. The old fashioned sand timer may limit the amount of time they get to execute their sketch, but it certainly doesn't limit creativity! Time's up! All players, all at the same time, pass their sketch to the next player, who must guess what's been drawn. Players then simultaneously pass their guess -- which hopefully matches the original word (or does it??) -- to the next player who must try to draw the word they see -- and so on."

Telestrations contains eight erasable sketchbooks and markers, a die, a 90 second sand-timer and 2,400 words to choose from. 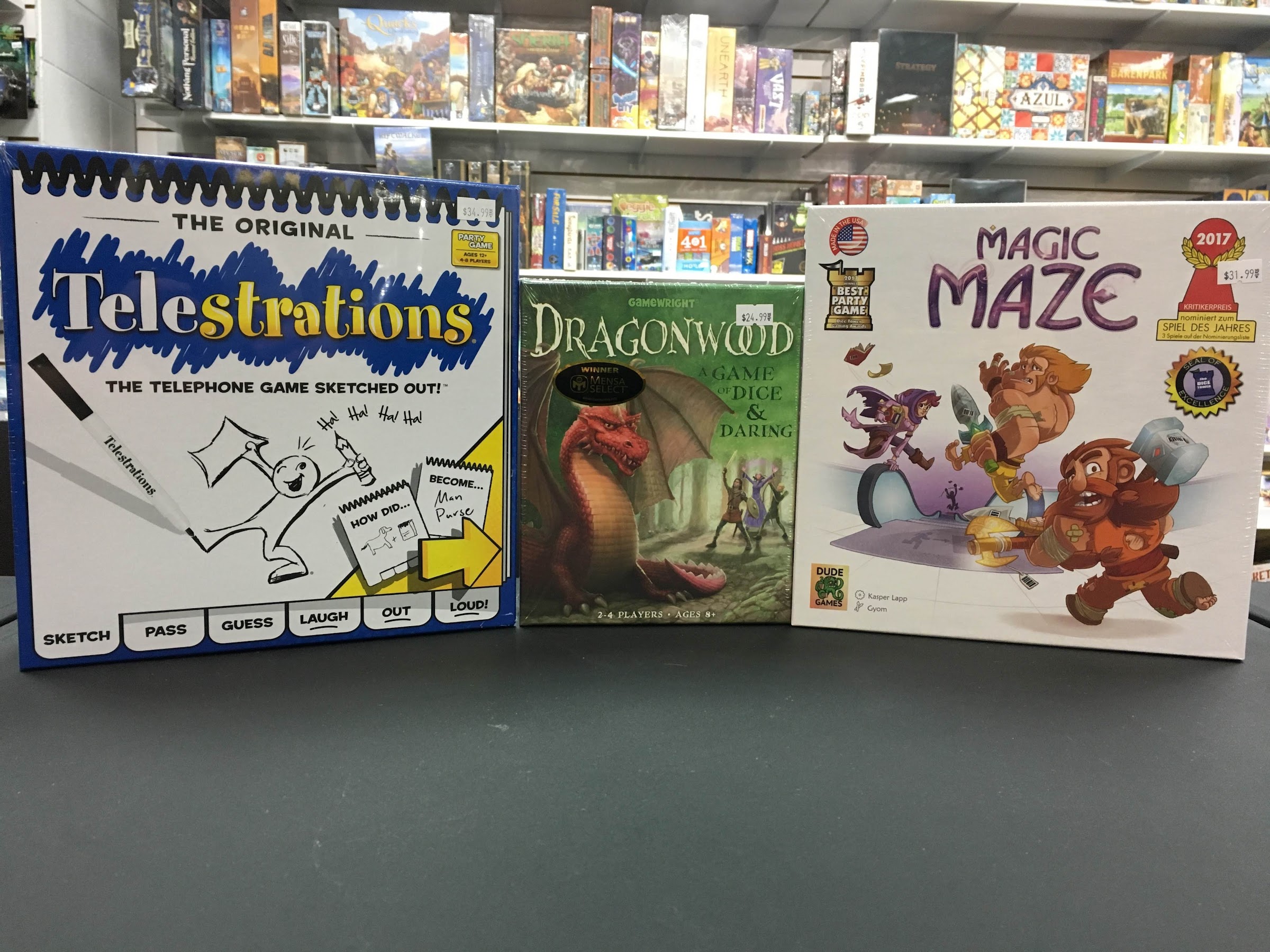 Cryptid is a unique deduction game of honest misdirection in which players must try to uncover information about their opponents' clues while throwing them off the scent of their own. Each player holds one piece of evidence to help them find the creature, and on their turn they can try to gain more information from their opponents. Be warned; give too much away and your opponents might beat you to the mysterious animal and claim the glory for themselves!

The game includes a modular board, five clue books, and a deck of set-up cards with hundreds of possible set-ups across two difficulty levels. It is also supported by an entirely optional digital companion, allowing for faster game set-up and a near-infinite range of puzzles.

Betrayal at House on the Hill

Expansions : Betrayal at House on the Hill – Widow’s Walk

Betrayal at House on the Hill is a tile game that allows players to build their own haunted house room by room, tile by tile, creating a new thrilling game board every time.

Secretly, one of the characters betrays the rest of the party, and the innocent members of the party must defeat the traitor in their midst before it’s too late! Betrayal at House on the Hill will appeal to any game player who enjoys a fun, suspenseful, and strategic game.

Betrayal at House on the Hill includes detailed game pieces, including character cards, pre-painted plastic figures, and special tokens, all of which help create a spooky atmosphere and streamline game play.

In The Quacks of Quedlinburg, players are charlatans — or quack doctors — each making their own secret brew by adding ingredients one at a time.

Each player has their own bag of ingredient chips. During each round, they simultaneously draw chips and add them to their pot. The higher the face value of the drawn chip, the further it is placed in the swirling pattern. Push your luck as far as you can, but if you add too many cherry bombs, your pot explodes!

At the end of each round, players gain victory points and also coins to spend on new ingredients to add to their bags. But players with exploded pots must choose points or coins — not both! The player with the most victory points at the end of nine rounds wins the game.

In Sheriff of Nottingham, players will not only be able to experience Nottingham as a merchant of the city, but each turn one player will step into the shoes of the Sheriff himself. Players declare goods they wish to bring into the city, goods that are secretly stored in their burlap sack. The Sheriff must then determine who gets into the city with their goods, who gets inspected, and who may have their goods confiscated!

Do you have what it takes to be seen as an honest merchant? Will you make a deal with the Sheriff to let you in? Or will you persuade the Sheriff to target another player while you quietly slip by the gate? Declare your goods, negotiate deals, and be on the lookout for the Sheriff of Nottingham!

Get the Expansion to add a 6th Player and lots of new cards! 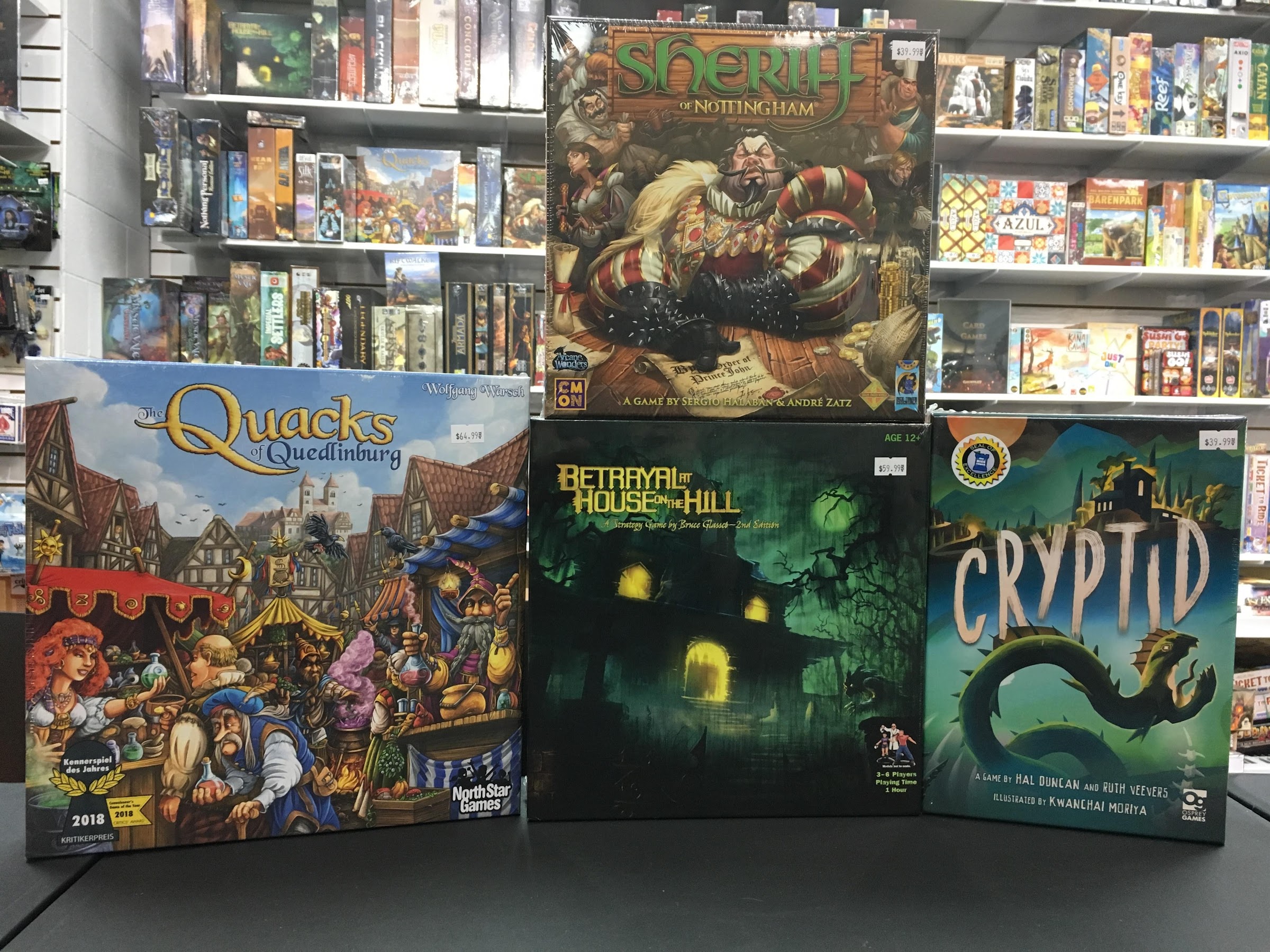